Yesterday I spent a couple of hours photographing in downtown GR, first near the pubic library, old YMCA, and Grand Rapids Children’s Museum, then near Spectrum Hospital. Most of the images are black and white, as I intended, but a couple called out for color.

The cover image and one below in the gallery are tunnels through to service entrances for businesses and the children’s museum on Sheldon Ave. between Fulton and Library. I couldn’t resist color images for the door in one of the tunnels and for the facade of the children’s museum. The mailman in the distance in the long tunnel to the interior of the block makes the picture. Nearby, next to the old YMCA is the church reflected in the Grand Rapids Public Library (Fountain Street Church).

Finally, there are several shots from the Butterworth Hospital of Spectrum Health on Michigan Avenue. There were few cars and even fewer people on a quiet Saturday morning, so I spent most of my time on the architecture. Three of the images focus on the covered walkway over Michigan Avenue. 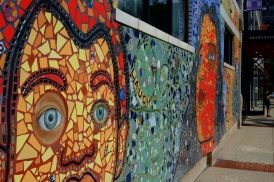