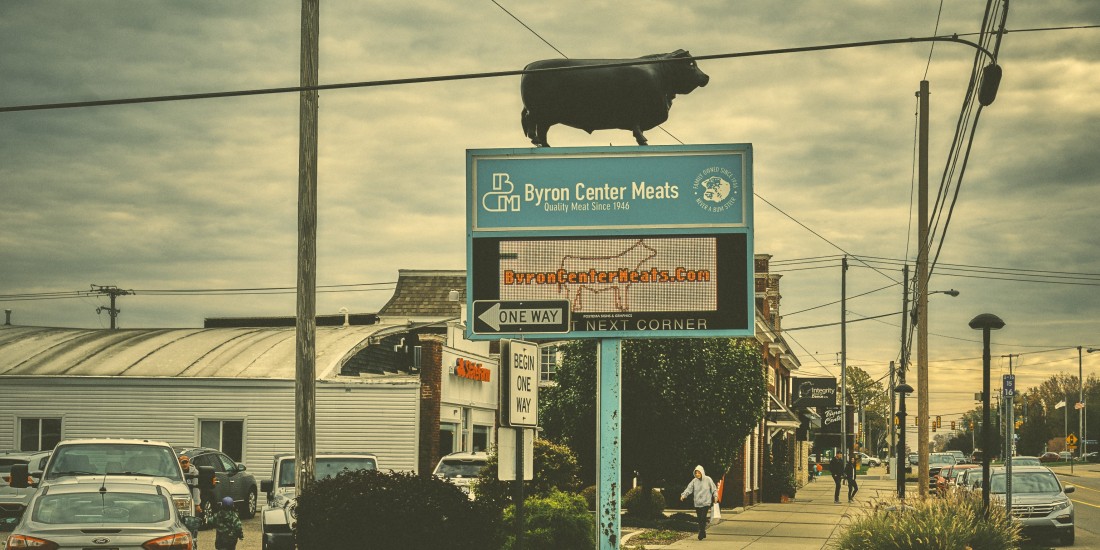 Last week I spent some time photographing in Byron Center. It’s an interesting place and I got some nice images of interesting buildings. Byron Center is different from most of the small towns and villages that I’ve photographed this summer and fall.

Technically, Byron Center is not a town or any kind of incorporated community, in that it is governed by its township and has no legal autonomy. But it has a post office, which serves the surrounding area, and it is a census-designated place. And it had a population of just under 6,000 in 2010, which presumably has grown in the past decade. And it is a center.

As a place, Byron Center feels like a mix of town and suburb. In a few areas on the main drag of the business district, there is parking on the street, which feels town-like. But the street is four lanes and there’s a lot of parking lots, which feels more suburban. Many of the buildings look like they were built or were renovated significantly enough in recent decades that they no longer feel historic. But there are exceptions and some have modern takes on the familiar Midwestern town look.

The current COVID-19 recovery economy shows itself in Byron Center’s restaurants, with several advertising for help. Service industries generally are going again, but a lot of former wait-staff are reluctant to go back to their old jobs because COVID-19 is still wrecking havoc or because time off has led them to decide that they no long want to do that kind of work. Below is another example of a restaurant looking for staff. The image that follows is a store. The restaurant echoes traditional Midwestern style architecture but in modern form. The store is lovely and simple in its brick work.

An old car dealership building has been turned into a restaurant and several stores. It still has a grand feel to it, despite some of the brick work not matching.

My favorite place in the business district, despite it not feeling historic, is Bryon Center Meats, with the beefy statue atop its sign. It stands out in a delightful way.

Finally, I got one of my favorite kinds of images: a reflection in a window that mixes up inside and outside, in this case including architecture, décor, and people.

As the fall season gets colder, and I envision winter and snow, this several-month series on small towns and villages will end. I’ll have to think of something to do over the winter. In the meantime, stay warm and be smart be safe out there.