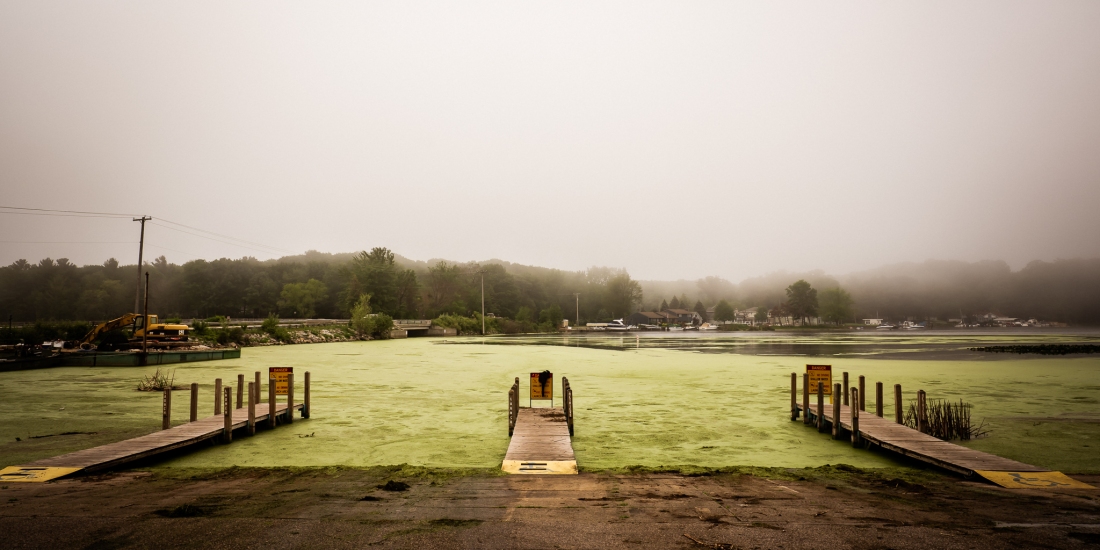 For a long time I’ve been curious about Port Sheldon-West Olive area on Lake Michigan between Grand Haven and Holland. I drove to it this week and photographed a few places in it and nearby. It’s a curious place.

Lots of small cottages and grander vacation homes. Much of the nice beach front appears to be privately owned. There are a couple public beach areas. Lot’s of farms, from dairy to berries and tree nurseries. And industry, notably a Consumers Energy power generation plant with a massive pile of coal, and a Grand Rapids water treatment plant (a bit to the north, at the end of Lake Michigan Drive.

Here’s part of the water treatment plant. As I drove by it, the blue color caught my eye. The late-morning fog, lingering longer near Lake Michigan than back in Grand Rapids, nicely softened the background. But the sun was strong enough to make its presence felt.

You can see the mix of vacation tourism and industry around Pigeon Lake, which opens to the big lake on its west end and turns into Pigeon Creek on its east side. I parked in the boat ramp lot and photographed from the bridge on Wednesday (June 30), my last day of a vacation spent mostly at home in the house, due to rain. I went back on the weekend and flew my drone from boat ramp lot to get some contextual images from the air.

The algae bloom in Pigeon Lake is stunning, presumably a result of fertilizer from all the nearby farms and perhaps warming water temperatures. There’s a eerie beauty to the green-yellow color, sort of, but mostly it makes the water look sick. The fog added to the atmosphere.

On Saturday there were at least a dozen vehicles with empty boat trailers in the lot, two more groups with boats arriving while I was flying my drone. The boats stirred up the algae bloom some, as you can see in the drone images below, but I’m sure it will collect again around the boat launch again over night.

On Wednesday, the one boat I saw go in the water was three guys fishing in Pigeon Lake on the east side of bridge. You can see the algae there too. I asked them about whether the water was clean. They said they did not think it was too bad. They were fishing for pike and bass, they reported.

From the ground to the air, now. Here’s a few shots from my Mavic Pro drone. They give you a sense of the context of the area. I flew north and south of the parking lot to get angles that show Pigeon Lake and its environs.

The shot of the bridge is looking southeast-ish. You can see some cottages on the south side to the right. The second image, looking southwest shows the channel from Pigeon Lake to Lake Michigan. On both sides of the channel are private beach associations. You can also see the curving oval line of railroad cars and part of a huge pile of coal for the power generating station. The third image looks north, from just south of Pigeon Lake, showing off the Consumers Energy facility.

Finally, the last image looks east up Pigeon Creek. You can’t see it, really, but there is a lot of farmland to the east.

I’m really curious about how the power generation plant has affected the value of vacation homes in the area. It dates to the 1960s. Consumers Energy is planning to retire plant in the next couple of years as part of its plant to go coal-free by 2025. I’m curious to see what that process looks like, how long it will take, and what the results will be. And I wonder what impact the presumed loss of several hundred jobs will have on the area. The air pollution associated with the power plant will decline, I assume, but the algae blooming presumably will not change.

This post feels like a reminder of the contradictions of modern life–“cottage country” as a sign of first world wealth, the algae bloom and power plant a reminder of what pays for it.

Stay cool and stay safe. COVID19 numbers are OK in Michigan this week, but they are on the rise in some parts of the nation, enough that the national numbers are on the rise again. We can have life close to normal, if people continue to be prudent in social distancing and if those who have not yet done it get vaccinated.