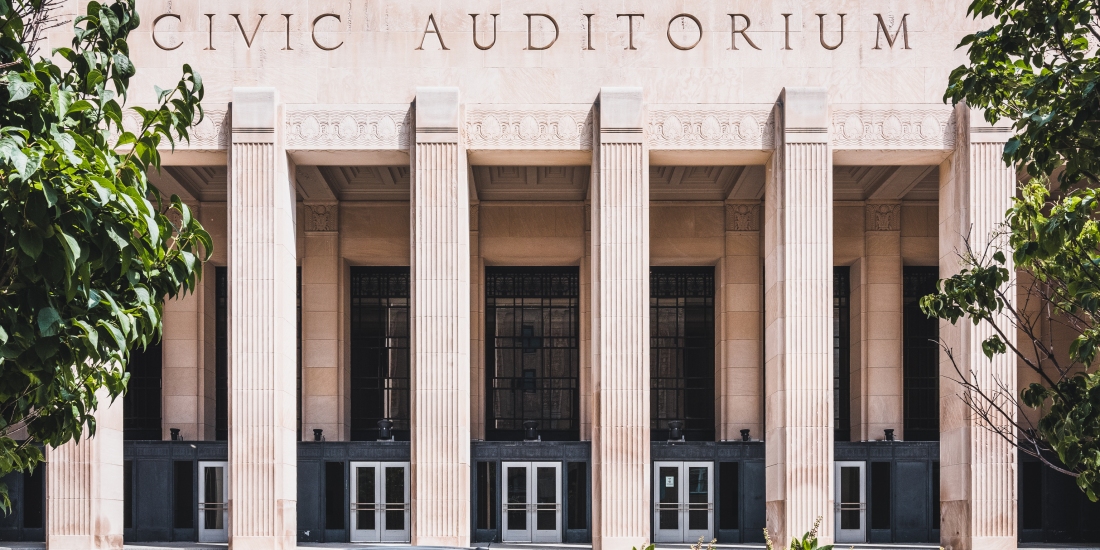 This week I returned to rephotographing Grand Rapids, focusing on public buildings. Two are city buildings — the main public library branch downtown and the old Civic Auditorium. One building is federal, or was federal — the old federal building, now Kendall College of Art and Design.

Part of the attraction for me is the beauty of these structures, even if aged, relegated, or damaged. Many late-nineteenth and early-twentieth century buildings in Grand Rapids — public and private — were torn down and replaced in the 1950s-1980s by ugly boxes with windows, as in many other cities. Part of the attraction for rephotographyt is that these buildings all show continuity and change.

The public library building is still the face of the city’s main branch of the public library. It’s just that a much larger library has been built around it, first in the 1960s, then in the early 2000s. The Ryerson library building was constructure between 1902 and 1904 with money from the industrialist Andrew Carnegie (who supported libraries across North America) and Martin Ryerson, a Grand Rapids local who had made good in Chicago. 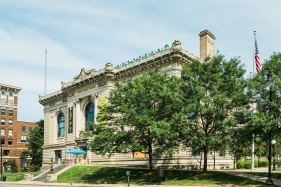 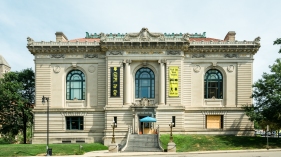 The first image in the gallery is a postcard from the early twentieth century. (All the old images in this blog post are from the postcard collection in Heritage Hall, at Calvin University.) The second image is my rephotograph of the postcard, followed by images of front of the building and the larger library facility built on to the back of the Ryerson building.

The second set of images is of the old federal building, built in Beaux Art style in 1909. Today, perhaps fittingly, it is Kendall College of Art and Design. When the postcard that I found was made, it was the “new” federal building. In this case, I could not rephotograph the building in a way that came close to the postcard. I did not have a wide enough lens and I could not back up far enough, because of the parking garage behind me. So I took images from inside the garage, as you can see. 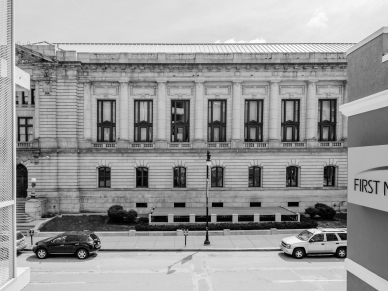 The first image is the postcard, from the early twentieth century. The second image is the part of the building that I could cover with my 25mm equivalent lens. The third, fourth, and fifth images in the gallery cover the whole building from inside the parking garage.

Finally, I rephotographed the old face of the Civic Auditorium, built in the 1930s, by the river. The building, with neoclassical and art deco elements, faces the old Exhibitors Building (before that the Fine Arts Building). The Fine Arts Building was constructed in 1925 as a furniture exhibitor’s space, during the heyday of that industry in Grand Rapids. Today’s the space is part of the Amway Grand Plaza complex, offering meeting space and offices. Both buildings have been relegated to side entrances. Both are still gorgeous. 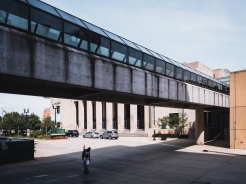 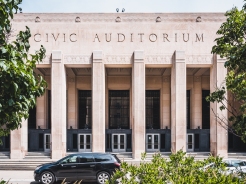 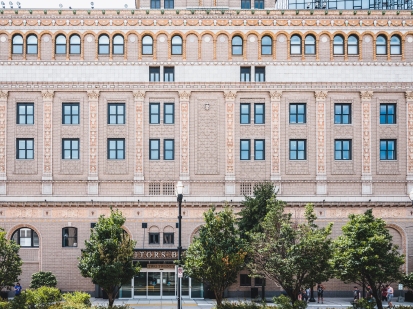 The postcard of the Civic Auditorium is what it looks like–an advertisement, from the 1940s. It’s an advertisement produced by a company that built radiators, blast coils, and ends of mains for the building. It says that “they are now stand ready to serve Uncle Sam.” During World War II, the Army Air Force Weather Service used the building to train thousands of soldiers in meteorology. As you can see, in the second image, I could not rephotograph the postcard exactly because there is a covered walkway that runs from the Amway Grand into the current DeVos Convention Center.

You can tell that the old auditorium has become part of the larger convention center recently built around it. The third and fourth images are straight on shots of the auditorium and the exhibition building. The facades of the buildings are gorgeous, if relegated to side entrances in the service areas of the larger buildings around them. The fifth images indicates this clearly.

I suppose that these images could be read as loss, or at least relegation. In some ways that’s true. But even if a bit hidden, as side entrances, the Civic Auditorium and exhibition center are hidden beauties.