For the past couple of weeks, I’ve been playing with Lightroom to get a better feel for converting images from color to black and white.  To give myself something to work on, I went back to photos I took in Florida this past Christmas, when I was there for a week with my wife and her parents, who were visiting from Italy.

When I download pictures from a camera to my computer, I’m pretty ruthless.  Two or three pictures in ten make it from the camera to the computer, and I actually work on only one of those pictures in Lightroom most of the time. So I went back to my files from Christmas and took one image from every day of the trip and converted it to black and white.

The images are presented here in order, from the lead image at the top of the page to a gallery below:  the pool at the hotel in Miami Beach from the first night; a street scene in Miami from day two.  Sunset in Key West and the Everglades from days three and four. I skipped day five–we were on the road all day, driving to Orlando, and I took a couple of iPhone pictures that day, nothing else. A Saturn rocket engine from the Kennedy Space Center and a flower from a garden in Orlando from days six and seven. A night scene in Fort Lauderdale from a traditional Christmas meal of pizza and beer at a cafe on day eight, and the Miami airport, waiting to return home on day nine.

Other details aside, all but one of these pictures turned out to be more interesting in B&W than in color. In some the color was distracting and the lines and textures stood out more in black and white. In others, the contrast of light, dark, and shades of gray was more interesting than the scene rendered in color. The exception is the sunset at the airport in Miami, shot from inside the terminal through the window; the colors were gorgeous and the picture seems incomplete to me without them.

For a number of the images I used a preset series called “Monolith” by Thomas Fitzgerald as a starting point. 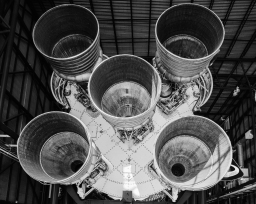 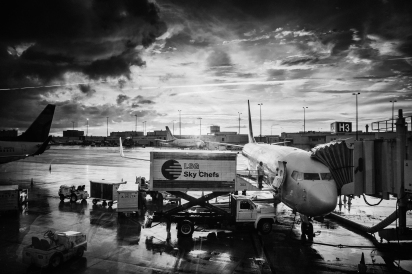