This week I decided to continue last week’s theme, rephotographing a couple more churches on the West Side of Grand Rapids. I put last week’s blog post on the Facebook page of the archives I curate, and a lot of people commented on being familiar with West Leonard Christian Reformed Church (CRC). So this week I rephotographed two more Christian Reformed church buildings from the same era (1900-1910): Broadway Street. CRC, and Alpine Avenue CRC.

The buildings share with West Leonard CRC (see last week’s post) not just a Dutch Reformed ethno-cultural history, but architectural features. West Leonard continues as a CRC congregation, worshiping in its historic building. Broadway sold its historic building and moved the congregation to a new location on Leonard Street in the 1960s, about 20 years after U.S. 131 was built in its backyard. It renamed itself Westview CRC. Alpine merged with Highland Hills CRC in the early 1990s and they reorganized as Westend CRC.

Here you see Broadway CRC, in early early 1900s (photo courtesy of Heritage Hall at Calvin University) and in 2020. 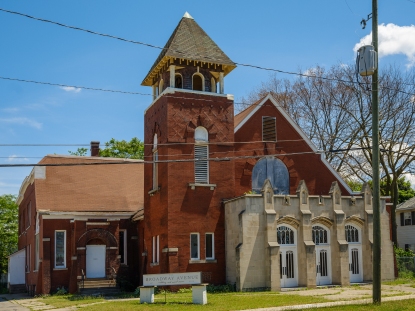 And here are images of Alpine Avenue CRC, in the early 1900s (photo courtesy of Heritage Hall at Calvin University) and in 2020.

Today, the Alpine CRC building is home to an evangelical congregation. You can still see the name of the CRC congregation in the cornerstone. The Broadway Street CRC building today is The Broadway Avenue Wedding and Event Venue. (So, people can still get married there and have the reception.) The cornerstone Broadway Street church’s name was removed at some point (you can see a bit of the messy brick work behind the event venue sign).

A few things strike me about the images. First is that when the churches were built, careful attention was paid to landscaping. Both images of the churches in the early 1900s are postcards and, as such, were meant to show of the church and the city. You get an almost pastoral/suburban feel in the Alpine Avenue CRC postcard. By contrast, both neighborhoods today look more prosaic. Trees are gone. Utility poles and lines cut into the image. The neighborhoods look older, though nearby Broadway CRC Leonard Street is going through some redevelopment.

Second, we see layers of history in the images. The communities that built the two churches have moved.  New groups of people make their homes in these neighborhoods. And the buildings got repurposed, either with a new religious community taking over or a commercial function replacing the original religious one. (Sometimes it goes the other way, of course, with a church or mosque taking over a retail space.)

Third, both the evangelical church and the event venue are quiet these days, shuttered by COVID-19. The event venue owners bought the Broadway building in 2018 and did renovations, but had the bad luck of starting their business shortly before a pandemic.