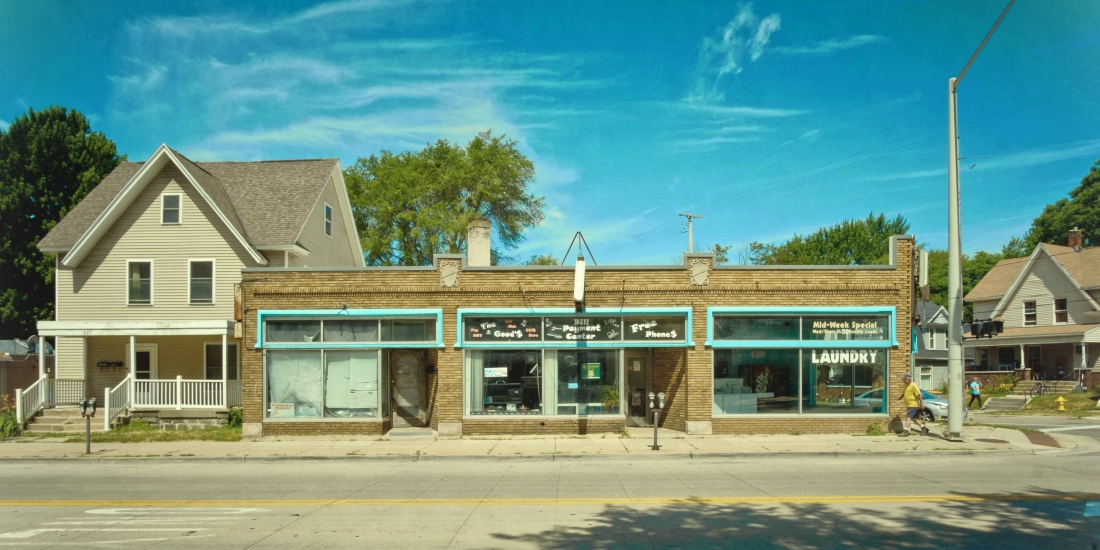 For much of the past year, I’ve been photographing small towns in West Michigan, in roughly a 45-minute radius around Grand Rapids, focusing on their central business districts. It has been the turn-of-the-century architecture that drew me in. There are a few more small villages and “corners” that I could do. But, for the moment, I’ve turned to the equivalents in Grand Rapids–the business districts of neighborhoods. This past weekend it was Plainfield Avenue in the Creston neighborhood in NE Grand Rapids.

For these images, I’m using a slightly different processing look. It’s still a postcard feel, loosely similar to the Polaroid/postcard look I did with the small-town series. But this look emphasizes the bright sun from this weekend.

Much of the architecture is similar to that in small towns in the region around Grand Rapids, some of the buildings likely looking similar to a century or more ago, some modernized. It’s a city street, clearly, rather than a small-town street. And much of the historic feel (more typical of a small town) is gone. But there are bits and pieces of it left.

This building is a good example. The lovely Italianate features of the upper floors. A sad-but-functional looking mid-to-late twentieth century renovation on the first floor. (And, U2’s Bono may have visited from Ireland in the 1970s before he and the band became famous.)

If the above image feels a little sad, the following four suggest how a modern sensibility can make older buildings interesting. Some of the old-fashioned “charm” may be gone, but these are fun, nonetheless.

One thing common to urban neighborhoods, small towns and villages, rural hamlets and cross-roads, even suburbs, is the “party store”–AKA a “corner store.” This old building looks like many I’ve seen towns and villages in West Michigan. So does the tavern in the second image, with its front windows covered in wood. I guess people like to drink without prying eyes looking in.

This brew pub works well, I think, as a modern renovation of an older style of building.

Some of the buildings are clearly mid-to-late twentieth century, and quirky. This one is interesting, even if it does not appeal to me aesthetically. But maybe to someone else it is delightfully retro.

Other building look interesting why you abstract part of the architecture. This “portrait” gives the building a face.

As in many of the small towns and villages that I photographed in the past year, you can see signs of both resilience and precarious economic conditions–a closed down business, now empty building. The restaurant in the following image also is closed (a victim of COVID-19 that never actually opened, I think).

This quiet side street, off Plainfield, is another feature of Grand Rapids’s neighborhoods like Creston. I mean the trees, in part, but especially the old-fashioned brick street. You can also see the mix of modern and older buildings (and a World War II memorial).

Finally, two more images of a charming older building, where the modern renovations work (in my view, at least).

I am not sure whether these neighborhood business districts will be my project for the summer. But there are lots of them in Grand Rapids–East Town, Cherry Hill District, Fulton Heights, Alger Heights, the Wealthy Street Corridor, to name some in SE Grand Rapids alone.